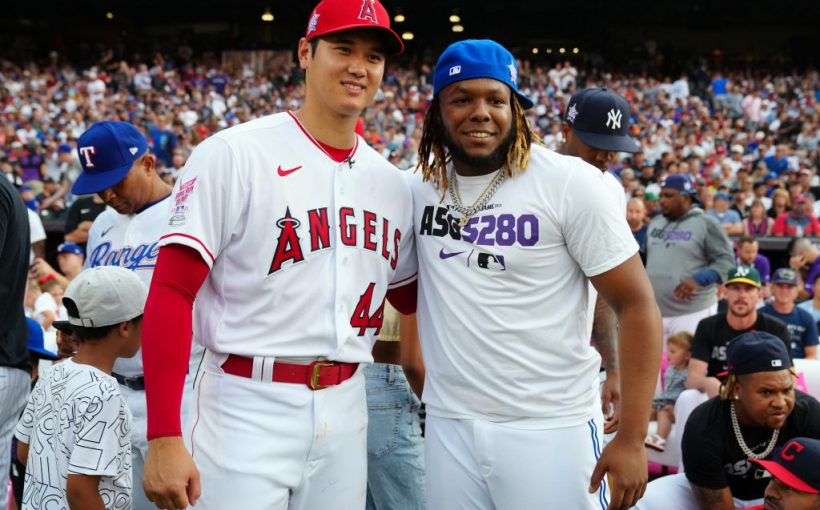 In a year where we have seen dominance, and some of the most impressive individual performances in recent history, the MLB regular season is coming to a close, and only one player from the AL and NL will take the crown.

Let’s look at the current MVP race that is close to coming to an end.

Ohtani has been performing this year at a level that baseball hasn’t seen since Babe Ruth. He’s a huge threat at the plate, but then also is pitching close to a Cy Young level. He’s sitting at an ERA of 3.28, with 146 strikeouts, while also is in third in home runs on the year. His strikeout rate is fifth in the league at (28.9%), and he’s batted in 94 runs for his Angels.

Shohei has lit up the sports world with national and worldwide attention. He is dangerous on both sides of the field, and his numbers alone show why he’s the clear favorite for the AL MVP this year.

If it wasn’t for Shohei, Vlad Jr. would be the clear favorite for the AL MVP this season. He’s tied for the league leader in home runs at 46 with Royal’s Salvador Perez and leads the league in total hits at 178. He’s sitting at the top of the MLB with a batting average at (.320), and he and his Toronto Blue Jays are red hot.

For a 22-year-old, he is outperforming by a mile and is going to continue to shine and make heads turn around the MLB. Unfortunately, Shohei Ohtani and his threat as a pitcher and a hitter make Vladdy fall at #2 in the AL MVP this season, but expect him to come back for revenge next year.

The Phillies did not have the best start to the season, and at the all-star break did not look like a playoff contender. That was until Bryce Harper started playing at an MVP level. They are only 3 games behind the Atlanta Braves and are looking to take that top spot in the final stretch of the season. Harper is on top of the league in OPS, and he and his Phillies are playing like a playoff contender.

Due to the Padres falling off the face of the earth, Harper should have an advantage in the NL MVP race and will continue to help his team push into the postseason.

At 22 years old, it’s safe to say that Fernando Tatis Jr. is the new face of baseball. But due to the Padres falling off the wagon later in the season, his argument for MVP significantly drops. He has still played great, but it just won’t be enough to take the award away from Harper.

He has still had a great season. He has 39 home runs and has driven in 92 runs, with 25 SB, he’s had a great year. If we were only looking at the first 3/4 of the year the trophy would be his. It just hurts his argument when his team has played horrible for the last month or so.

These guys have all played like MVPs this season and have all made an argument as the greatest players in the MLB. Vlad Jr. and Tatis are both the two bright young stars in baseball and will continue to have years like this to come.

Harper and Ohtani have just done enough to take home the MVP this year.