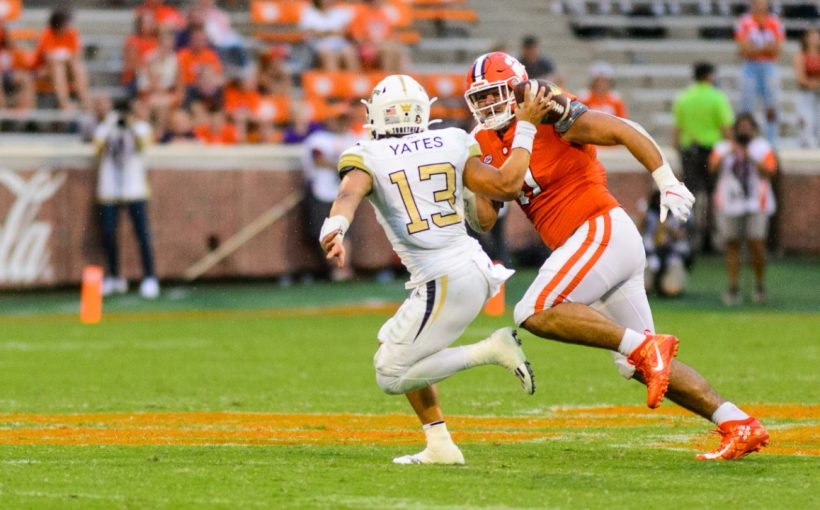 Penn State took down Auburn in Happy Valley, Clemson and Ohio State struggle, Cincinnati barely gets by the Hoosiers, we are here to recap and highlight Week 3 of College Football.

Alabama pulls off the win on the road

Alabama had a scorching hot start to this game as they lead 21-3 at the end of the first quarter.

Nick Saban and the Tide stay undefeated as Dan Mullen and his Florida team move to 2-1 on the year.

The Florida defense really stepped up in a huge way in this game. They were getting beat on the ground and in the air, and they had to figure out how to stop this Tide offensive attack led by Bryce Young behind the center of Alabama. As he is one of the frontrunners for the Heisman trophy so far, he showed exactly why he deserves the award.

Regardless of how good Bryce Young and the Bama offense played, the Gators defense deserves a pat on the back. For the first time since the 2017 season, Alabama was held to three consecutive three-and-outs, and this Florida defense wasn’t going to step down.

It was a great game by both teams on Saturday in “The Swamp”. Alabama’s defense stepped up just when they needed to force the win over the Gators 31-29. While Alabama still played a good game this week, they showed that maybe they are beatable and that there are maybe threats from Texas A&M and Georgia this season in the SEC.

Cincinnati comes out of the Hoosier state with a win

Cincinnati is trying to show the nation and the CFB Playoff committee who they are, and that they can compete with anyone around the country. This week they were tested with the Big 10 in Tom Allen’s Hoosiers’.

The Bearkats struggled early on in this game, they were having trouble stopping the Indiana offense, and quarterback Desmond Ridder couldn’t really get much going throughout the first half of the game.

Ridder showed that he’s not as much of a drop back in the pocket kind of passer who thrives on moving around in the backfield and making plays with his legs sometimes. Cincinnati with a second-quarter rally and a strong second half took this one 38-24, barely getting by in Bloomington.

The Spartans blowout Miami in the second half

The Michigan State Spartans have their first 3-0 start in over 5 years as the Spartans roll into Miami Gardens with a big win over the Canes 38-17.

Spartans QB Payton Thorne throws for 261 yards with 4 touchdowns against the Miami defense. The Spartans defense really found out how to contain Miami QB D’Eriq King and started limiting him on the ground. King threw for 388 yards in the air but also threw two interceptions, which really helped Michigan State get the ball rolling.

What started as a close game in Miami turned into the Spartans running away and leaving with a big win. The Spartans played a tough game, but they still have work to do to get by some of their Big 10 foes this season.

In a game against ACC rivals Georgia Tech and Clemson, we saw a hard-fought game against the two teams. The game was delayed late in the second half because of weather, and the game was on pause for 1 hour and 52 minutes on Saturday.

Georgia Tech kicked a field goal to make the game 14-6, but knew that they had to do more to upset the Tigers. They then attempted an onside kick where they recovered the football, giving them another shot to score to try to win the game.

The Yellow Jackets drove the ball down the field, all the way to the 2-yard line. With so little to go, and an interesting play call by GT, they attempt a shovel pass to try to push it in the endzone, but the Clemson defense prevailed and held them out of the endzone. Clemson then gets the ball on their own goal, and for some reason, Dabo lines up D.J. and running back Will Shipley out of the gun in their own endzone. The tigers try to shove the ball down the middle, but the Yellow Jackets defense forces Will Shipley to fumble in the endzone to force a safety, which makes the score 14-8 late in the game. GT quarterback Jordan Yates threw a last-second INT, which ended the game and the Tigers got by 14-8 at home.

The Tiger’s offense struggled in this game and really had to rely on the defense to make stops in this one. Dabo and his Tigers move to 2-1 on the year and moved to No. 9 in the country on the AP poll. There are still a lot of unanswered questions about this year’s Clemson team that we will have to figure out throughout this season.

The Mountaineers pulled off a big upset against No. 15 Virginia Tech. West Virginia really relied on their first half, where they were up 24-7 at halftime.

The Hokies played much better in the second half, but it wasn’t enough for the comeback, and they fell to the Mountaineers 27-21 on the road.

The Sooners struggle early against the Huskers

Nebraska fought hard against old rival Oklahoma on Saturday in Norman. The sooner had their struggles early in this game, but with mistakes from the Nebraska special teams unit, Spencer Rattler and the Sooners were able to pull off the win 23-16 at home.

Penn State takes down Auburn in the “White Out” game

The Nittany Lions really showed up on primetime Saturday night and defeated the Bo Nix and the Auburn Tigers out of the SEC 28-20.

Sean Clifford played a good game against an aggressive Auburn defense, and really helped the Nittany Lions take the game. He threw for 280 yards with a pair of touchdowns on the game. Auburn relied heavily on their star running back Tank Bigsby in this game, who had 23 touches, carried the ball for 102 yards, and had 2 touchdowns on the night.

Auburn had many opportunities in this game and the offense just couldn’t take advantage of them in this game.

Penn State has had an impressive start to their season so far, moving to No. 6 on the AP poll.

Plays of the week

BLOCKED AND BROUGHT BACK FOR TWO 🔥

D.J. GRAHAM REALLY PICKED THIS OFF WITH ONE HAND 🤯 #SCtop10 pic.twitter.com/Qe9Nys7TkA